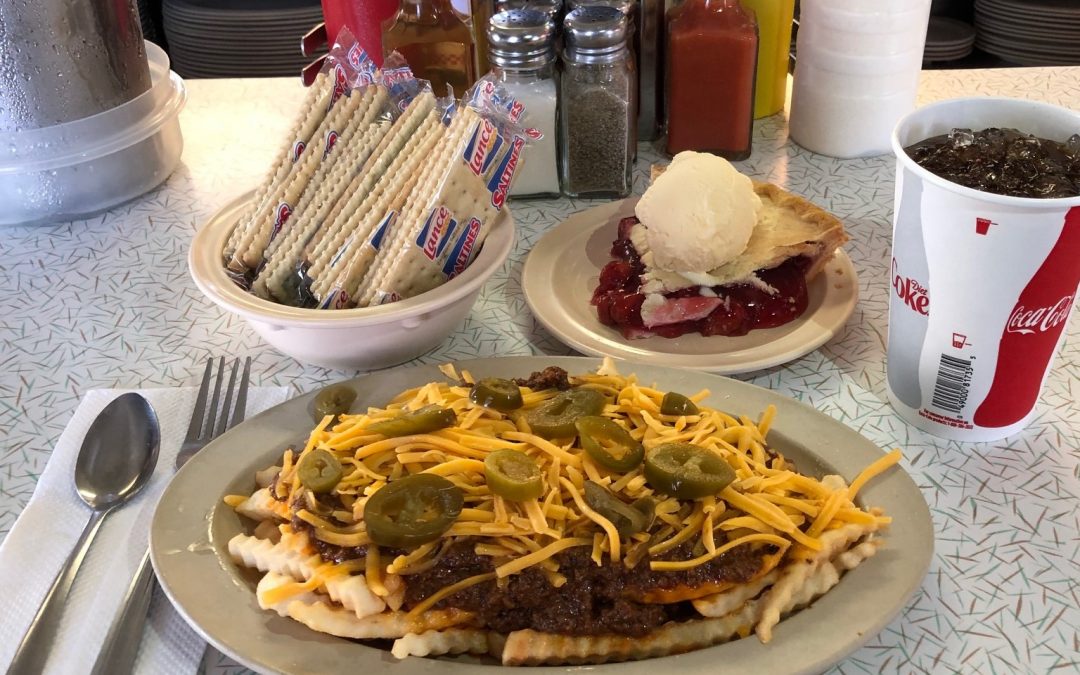 Fred and Red’s is a historic greasy spoon diner in Joplin, Missouri. The restaurant was started in 1923 and moved to its current location in 1943. The original arrangement and features have remained relatively unchanged through two generations of family ownership. The diner had been for sale for several years, but with no suitable offer, it closed on March 16, 2012 and the owner (Larry Wilcoxson) retired.[1] Wilcoxson died in 2016, and the business was purchased from his heirs by David Schaefer, with plans to reopen the business in October 2016,[2] but modernizing the building to get it current to department of health codes delayed the reopening until November 23, 2016.

Fred Herring started a chili counter on Joplin’s Main Street just 3 blocks south of what would become Route 66. The eatery catered to local blue-collar workers such as the area miners and in 1943 was moved seven blocks south to its current location, which happened to be across the street from the grocery store that supplied the meat for Herring’s chili. According to a 1951 Joplin City Directory, the restaurant was known as Fred and Grover’s. The butcher at the grocery store was William “Red” Wilcoxson, who bought half of Fred’s business in 1956 to become his partner.

In 1973 Herring retired, turning his responsibilities over to Red’s son and final owner Larry Wilcoxson, who worked at the restaurant from age 11. In 1975 Herring died, and Red Wilcoxson retired, and Larry ran the business himself until it closed, March 16, 2012. The Southwest Missouri eatery was a local landmark.[3]

Schaefer, himself a long-time fan of the restaurant, reopened the store on November 23, 2016, and while keeping most of the business practices the same (including keeping prices the same from the day they closed in 2012), did modernize and update many items, detailed below in the “notable facts” below.

Fred and Red’s was famous for their award-winning[4] chili, tamales, and Spaghetti Red. They also served coneys, chili burgers, hamburgers, frito pie, and home-made fruit pies.[3] Red Wilcoxson died in 2005, causing his son Larry to consider selling the business [3] where he had worked since age 11, but with no suitable buyer being found, Wilcoxson decided to retire and discontinue the business. This decision was announced by his daughter on the Facebook fan page called “We Love Fred and Red’s”[5] on March 5, 2012.

With the announcement of the upcoming closing, demand grew dramatically, often greater than supply available. After two stressful weeks of working extra hours to keep up, Larry Wilcoxson decided to close sooner than the planned mid-April date previously communicated. The business closed its doors on March 16, 2012, around 5 PM. Wilcoxson was given the last serving of spaghetti red.

The restaurant has a distinctive “U-shaped” counter, 22 barstools, and a central serving area. One of the restaurant’s unique features was a home-made tamale press created from scrap Ford Model T car parts and used to manually make 5400 tamales every week. The Health Department would not certify the tamale press for the 2016 reopening, so the tamales are now made by hand.

A local fan of the restaurant, Dan Daugherty, composed a poem in tribute to Fred and Red’s, and for many years it was printed on the back of each guest check. A framed copy of the tribute is posted on the restaurant’s wall.

The diner had no drive-thru window, no published phone number, and a smallish parking lot, but did a brisk carry-out business. There were frequently long lines waiting for one of the 22 barstools at the counter. Schaefer plans to add a drive through in the future, but it was not ready for the 2016 reopening.