Dave Woods: Bourdain Had ‘No Reservations’ About Joplin 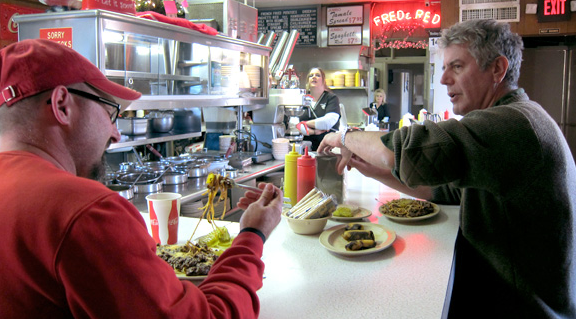 I got excited when I learned Anthony Bourdain was coming to Joplin.

I’m a loyal viewer of “No Reservations,” and have long loved his irreverent on-air style. I tempered my excitement with a little caution, though. I wanted to get an interview with Bourdain and write a story for the Globe’s On the Table section, but sometimes television stars, musicians and media personalities aren’t easy to corral, if they show up at all — Willie Nelson, I’m talking to you.

On the Saturday night Bourdain was scheduled to come to Joplin and observe a Mo-Kan Arms sanctioned arm wrestling tournament at Rumors Lounge, I decided to run down and hang out a while to see if he would show. Worst-case scenario, Bourdain would be a no-show, I would have a beer and head home. Best case, I would snag a quick interview, take advantage of a celebrity photo opportunity, have a beer and head home. Either way, it was a win-win for me.

At 5 p.m. on the nose, an unfamiliar woman with a clipboard walked into Rumors and started looking for someone in charge. A moment later — as if cued by a stage manager outside — in walked Bourdain with three videographers in tow. He made a beeline for the beer taps, sat down next to me at the bar, ordered a pint and tossed a $20 on the bar. In an attempt to make clever conversation, I asked: “Long trip?” He nodded, smiled, slammed a big gulp of his beer and started telling me about his travel day as if we were fast friends: New York to Chicago to Springfield, into a rented van and straight to Rumors. That’s a long day, even when you fly first class.

Bourdain shed his heavy outer wear, finished his pint, ordered another one and went to work. For almost three hours, Bourdain’s crew followed him around as he watched and talked with arm wrestlers, posed for pics and signed autographs for his foodie fans. I was fascinated watching the camera operators work, shooting every possible TV moment they could record. Almost every minute of Bourdain’s visit was captured for consideration in the upcoming Ozarks “No Reservations” episode. I secured my interview for the next day and watched him work the room, talking to his fans who showed up at Rumors to shake his hand and snap a photo.

Scott Bicknell, the owner of Rumors Lounge, was in early contact with Bourdain’s producers and helped organize the arm wrestling event for the shoot. He put out a Facebook post earlier in the evening and alerted his friends to Bourdain’s arrival. It worked. “No Reservations” fans started arriving soon after.

“I was kind of shocked how nice he was,” Bicknell told me, after meeting the culinary star. “I thought he might be an a–. He wasn’t. He was charming and nice and a really cool guy.”

At one point in the evening, Carol Snyder, a longtime local bartender, challenged Bourdain to an arm wrestling contest. Carol, who weighs in at around 100 pounds, tossed down a $10 bill and told Bourdain to match her — “winner takes all.” Carol told the Travel Channel star that if she won, she would donate the winnings to a children’s Christmas charity. To Carol’s amazement, Bourdain pulled $200 out of his pocket, laid it on the table and said “Let’s do it.” Bourdain let Carol sway in the wind a few seconds, arms moving back and fourth across the table. Then, Bourdain looking like he needed another beer, penned Carol’s wrist down. They laughed, hugged and Bourdain insisted his winnings go to charity of Carol’s choice. Nice form, I say.

As word spread around Joplin that night, a couple dozen Bourdain fans filled the bar interested in taking a look.

Pete and Heidi Williams, owners of Woody’s Woodfire Pizza, dropped in with a group of friends and offered to feed Bourdain and his crew. Bourdain interviewed Pete for the show and agreed to stop in at Woody’s after the shoot.

As the night ended, I finalized the details of my interview and thanked Bourdain for his time and attention. I may be the only “No Reservations” fan in Joplin who didn’t get a pic with him.

As the next week unfolded, I heard — and read — tales of Bourdain’s Joplin travels. Globe columnist Cheryle Finley encountered Bourdain at Fred and Red’s and I heard a chef at Holiday Inn was honored to cook for Bourdain’s crew during his stay. Bourdain, it seems, charmed the Ozarks.

During my interview I asked if he always met with such interest and fascination when he traveled the United States .